It is with great sadness we share the news that Terry Chambers has passed away after a hard -fought battle against COVID-19. Terry passed away on the 12th of January 2021 leaving a huge hole in the hearts of his family and the driving world.

Terry had the vision to create the best driving facilities in the country where many of you have enjoyed the ambiance and friendships that Ashfields created.

In 2003 he saw an opportunity and bought Ashfields with the vision to turn it into the state-of-the-art equestrian centre that you see today. With Wilf and Zoe, and their passion for the sport of Carriage driving trials, he took the opportunity to create a mecca for Carriage driving, and grew the centres facilities which so many drivers have been able enjoy over the years. It takes an extraordinary visionary to, not only be able to see potential in a property but to be able to have the patience and ability to build and maintain such a vision, and for it to be available to such a cross section of people to enjoy – as an example, one morning Terry opened his curtain to be faced with 300 plus caravans and over 1000 excited dogs all getting ready for a weekend of dog agility, (as quite a few of might know his passion for dogs was not as deep as his passion for his horses)!

One of Terry’s main passions was coaching, which he has enjoyed for many years. Initially competing at country shows, in the latter years of his coaching career his main passion was taking his Road Coach out with his friends for a Sunday drive visiting a number of hostelries on the way. Before leaving the stables, Lou would programme the Team Horses ‘Sat Nav’ to bring them all safely home.

Terry was a Coaching club member and relished his Coaching club drives. The Magazine meet and Royal Windsor were big days and annually booked into his diary in addition to the glorious meets at Ashfields which he so generously hosted.

The Social side of driving was hugely important to him and he was always on the terrace catching up with old friends and holding court. He was proud of the centre and loved to see everyone enjoying the superb facilities. One of the things that would make him chuckle was when people would stop to ask ‘the gardener’ for directions or if he could ‘turn off the mower’ or ‘move that old tractor’ so they could get past. Little did they know that under that unmistakable straw hat sat the man himself, Terry, their event host!!

Terry was a great family man and is already a huge loss to his family, Dulcie, Ben, Ruby and Lisa, as well as his 13 grandchildren along with all of the Ashfields family. 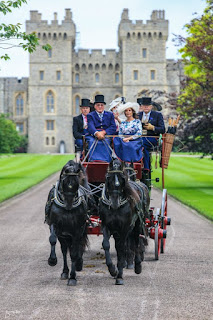 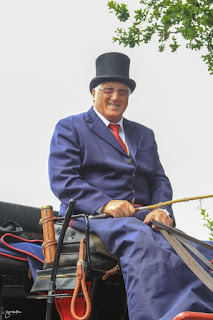 Just a reminder that the bookings are still open until 6th July for the driving camp at Thetford Forest.

With the Governments restrictions being lifted on 4th July regarding camp sites we can confirm that subject to sufficient numbers booking this event will go ahead.

Please see the schedule for this event and book online on our Events page
Posted by Mike Watts at 09:30 1 comment:

Hi All,
We have great news, due to the unprecedented success of the training this weekend held at Ashfields and coupled with the excellent way that all of the trainees complied with government guidelines and the terms and conditions we set to assist with the Covid-19 pandemic, we have taken the decision to run another training day in two weeks time, if numbers allow we will extend the training to run over two days.

If the Government keeps its plans to allow caravan sites to open on 4th July then you will be allowed to stay over at Ashfields if booking two days training.

Please see the schedule outlining the day and the booking protocol, we will only accept definite bookings and these must be by email to either this email address or to Lorna at sec@eacdg.co.uk

We hope you are all well and coping with lock-down, we have been working hard into looking to put on 2 training days on the 20th and 21st  June at Ashfields, please note this is purely provisional at the moment and dependent on no further increase in lock-down or the government changing the guidelines.

On Saturday 20th June the trainers will be Sara Howe and Anna Grayston who have both passed the covid-19 safety course on line, as Wilf and Minta are based at Ashfields they will be available both days.

There will be dressage arenas set up and a cones course, there will also be obstacles to drive.
If you wish to enter, please e-mail Lorna sec@eacdg.co.uk and say which trainer and which day you would like to come and how many 45 min lessons you would like so we can get an idea of numbers, please ensure you leave a contact number and details as we will use this to confirm whether or not this will run.

Here is a list of rules you will need to follow to comply with our risk assessment and safety guidelines
A few days before the training we will make a final assessment based on numbers and the current situation, we will then open up the on line entry system for 48 hours for you to do an on line entry, you will be sent an e-mail or telephoned to tell you when this is, if we do not receive your payment before the closure of bookings we will not process your booking, there will be no exceptions.


The Committee here at EACDG have been constantly reviewing the current Covid 19 outbreak and the possible effects to our Organisers, Judges, Stewards, Ground crew, Drivers, and obviously the general public, we can assure you that safety is our utmost concern and with this in mind, coupled with both Government guidelines and BC recommendations we have taken the decision to cancel our March training day along with our one day event.

The April two day training and April two day event with NNQ will be postponed until later in the season as long as the current situation dictates.

All other events will remain on the calendar but will be reviewed regularly.

Obviously we will keep you informed as and when anything changes.

We wish you all well in these troubled times.

March and other event details


Welcome to the new season, we hope you've had a good winter and all is well?

We write you this email just to bring you up to date with a few notifications.


We hope you have a great season, have fun and we look forward to seeing you all soon.


We hope you have had a wonderful winter and didn't get too wet or windswept.

We take this opportunity to bring you up to date on the fast approaching 2020 season:


Please note that we try to keep you up to date at all opportunities, we use emails for those registered with us, we have the club website www.eacdg.co.uk and the club facebook page.

We hope you have a great 2020 season and look forward to seeing you all soon.